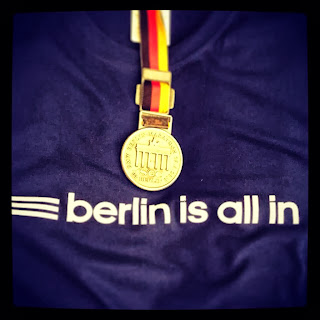 So... I made a vow to myself, if not the World, that I would run 5 marathons. Then that was it. Over. Having PB'd Barcelona 2010 in 3 hours 27 minutes, I achieved two successive 3:30 marathons where both times I melted in the heat...

I felt I'd hit a glass ceiling. I varied my training for both 3:30s. I thought I'd done the right stuff. On reflection maybe I hadn't run enough miles or done enough speed work to push me to the next level. I found hitting 3:27 relatively easy... but got stuck. And now it was affecting my belief about whether I could go faster. In the last marathon (Barcelona 2012) I walked for the first time in 5 efforts, which didn't seem right.

I research and write about endurance, from advice to first timers to assessing the mental health of the UK endurance population to one to one advice with athletes. But thinking about running another marathon gave me slight palpitations. Don't get me wrong, I love running, giving it 100% in shorter distances and the discipline/relaxation that training gives me. But could I be bothered going through the rigmarole of running lots in training and then being disappointed by another slower time than my PB...

I gave it thought and was convinced by my best running mate, a late starter who has evolved into a running MACHINE to give the marathon at least 1 more crack in Berlin. My first Autumn marathon, a flat course where the weather tends to be more forgiving and is renowned for hitting Personal Bests. What's the worst that could happen? At least I'd be in Berlin, a place I love. I only have to prove this to myself. So I kept the fitness up, worked hard at running, clocked PBs through Summer and kept quiet on my intentions. "We go in, do the kill then get out, OK?" Less pressure. Still, my chimp was uneasy.
But through serious physical and mental preparation, by 8.45am yesterday I was on the start line. 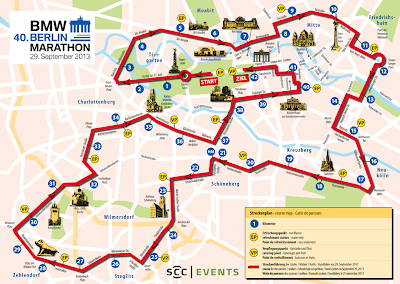 This is the story to act either as a deterrent or inspiration if you're wavering as I did. Just don't say I didn't warn you!

The plan was simple. Run the first 10 miles 5 seconds slower than marathon pace (7:25 minute miles), the next 10 miles roughly 5 seconds quicker (7:20 minute miles), then aim to go for 7:15ish minute miles from 20 miles to the finish. On the day, I managed the 20 miles part fine, the last 6 less well. I had tested whether I would be able to push on in the last few miles during training, with success, but was aware of what an unforgiving mistress the marathon distance is, so approached with some caution and a bit of wiggle room to allow some slow down. In the event I lost about 30 seconds per mile for the last 6 miles compared to the plan, but in the event, ended up with a 10 minute PB, which before the race if you'd offered to me, I'd have happily taken off your hands! After all, though going for 3:15 was the main target time, this race was about laying ghosts to rest and doing the best of my ability come race day.

Looking back this is how I remember the day.

1KM to 8KM - A bit crazy! Busy finding position. Easy to stay on pace. Was getting balance to stay in the groove; legs turning OK, getting to a point where didn't need to check watch every few minutes. (Note to self: Get better in training at running marathon pace without the need to check the watch). Mentally was jumping around a bit because of the huge crowds, new course, tonnes of runners, and not having run a marathon for 18 months... The pressure. Self inflicted...

8KM to 16KM - Reichstag to Kottbusser Tor. Was checking to see if I could stay on pace. Answer? Yes! Still a bit jangly on nerves but had simmered as the hoards of runners thinned out. Loads of bands, nice scenery, in my favourite suburb of the city. Sun shining but nice cool breeze. Bit of fear about what might happen later but calmed chimp down and stayed within each mile I was running rather than getting too far ahead with my thinking. Pace felt easy and comfortable.

17KM to 25KM - Kottbusser Tor to Wilmersdorf. Tucking nicely into race. Miles felt good. Go up a gear and go sub 7.20 per mile. Saw my girlfriend and friend at half way; spirits lifted. Legs felt good and strong. Lost a bit of running form, but caught myself and got back into groove. Running is beginning to feel a bit harder...

26KM to 32KM - Now we're getting down to business! Sub 7:20 pace is feeling harder work now. Reading my Garmin is hard work. Every time it clicked over a mile split, it began to take about quarter of a mile to re-calibrate so you're doing a bit of a dance to speed up/slow down to stay where you want to be speed wise. Was sticking hard to the blue line that marks the most efficient route of 26.2 miles to keep the overall mileage you run in check. But, mental fatigue was beginning to creep in. That first 10 miles? The pace felt a doddle. I saw Padraig from my club at mile 19. My God that cheered me up! ("Yes Pod!" I hollered). Every time I crossed a KM marker, I'd raise my arms like a boxer signalling he was ready to fight. It energises me, but by this point, my arms were beginning to feel heavier each time I did it... I just kept thinking: "18 to 19. Nearly 20, then it will ONLY be a 10K run to home." At the time though, it might as well have been double the distance. I didn't ache anywhere, but felt zapped, like superman when someone wafts a piece of kryptonite in front of his face. But in mile 19 I thought I wasn't doing well, but I still clocked an 'on time mile' of 7:19. Next mile though was not as strong and overall average race pace was slipping from 7:23.. to 7:25.. to 7:27.  The mind was willing, the body was not. However, it wasn't disastrous at all. I just found it hard to kick. The battle with the mind and getting to the finish was just beginning....

32KM to the finish - I knew I hadn't hit the wall. That was great. And though I was slowing, I was only losing 15 to 20 seconds a mile. I kept thinking, "If I can get to mile 23 then maybe I'll get a burst of energy and be able to imagine going for a slower than normal park run,"but the long streets of Berlin from mile 23 to 26 seemed to have been stretched to double their normal length. Fatigue had kicked in. You know its coming, you can prepare yourself as much as possible, but you're running either at your limits and wringing out the best performance, or as I experienced in Barcelona 2010, you find another gear and can kick on to the desired pace. Until you're in mile 23 though, you won't know which option is going to present itself on the day. [Another note to self, forget thinking about the first half of the race. That will take care of itself. Double your investment in psych skills in the last 6 miles. It is SO true that mile 20 is halfway mentally!].

Those last 6 miles felt like they'd pushed me too far. Didn't want to step out of the race, but could not help myself thinking: "Why do you put yourself through this. Stick to half marathon, 10k, park run, anything but this!" Whatever psych skills you try, its hard not to shake such thoughts. I did use a strategy that instead of focusing on the watch to instead focus on a person ahead, run up and past them, find another, repeat. Which I was able to do, but then I'd get a bit stuck at 'the slow pace' where just moving seemed like achievement.

I could see the dome at the Reichstag. "Ah! The finish! Not far away, but who keeps effin' moving it! Now its getting farther away! Wheres that fricking Brandenburg gate?? The watch says almost 26 miles. ALMOST THERE! but make this mother end!!!

"Please. I promise. I solemnly promise, I WILL NEVER RUN ANOTHER MARATHON AGAIN. THAT BLOODY ENRIQUE! NEXT TIME, PLEASE SOMEONE, GET A GUN, PUT IT TO MY HEAD AND MAKE ME REMEMBER THIS MOMENT. You're a good athlete, but just stick to shorter distances, OK?"

"Try and remember someone significant, focus on that individual. Distract yourself from the pain."
But its not pain. I've just lost the turbo injection to my engine. The car is still running. It's just not going to do anymore bursts of speed today. I keep going. I spot an official marathon clock with a mile to go read: 3:10:00.

"Hang on! I didn't cross the start line till 3 minutes after the official start... that means I've got 8 minutes... Is the 3:15 still on? Whoop! Catch that guy in the yellow vest. Turn the corner. There you are Brandenburg gate. Hang on, watch says 26.2 miles. Is that blue inflatable display in front of the gate the finish? I swear I was told the finish was AFTER the Brandenburg gate. Oh it is. Bugger!"

"Screaming on the limits. I WANT TO GO FAST! Keep those legs turning. Try for a sprint finish." The most pathetic sprint finish I've probably run. I tiredly raise those arms as I cross the line. It's over. "Oh my God! I've PB'd. Massively. Goodbye 3.30. It's been nice knowing you. Hello sub 200 minute marathon: 3:17:59. You took your time...." Dragon slayed. Just don't ask me if I'll ever do it again.