Down to Earth & Google maps 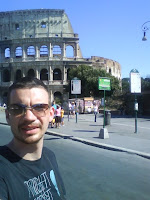 So I now have been back 2 weeks exactly from my trip. It is 6 months to the day of my birthday (and is indeed my Grandfathers birthday today). And 4 months, 6 days from when I made the decision, whilst watching Radiohead on a sunny night in June, to go away for the summer.

Someone asked me the other day if I missed travelling since my return, but going back to University the week afterwards has taken away any opportunity to dwell. But I've made use of the time, seen my nearest and dearest, celebrated my Grandmas 90th birthday, and got stuck into the next thing I'm turning my hand to do and enjoying.

But I thought I'd take the time to tie off the last bits of whats been an amazing time by throwing a few stats to those interested and thanking one or two folk.

A few people have asked - where did you actually go? Well, click here: http://www.gmap-pedometer.com/?r=2314601
and you can see my route!

Using Googles Pedometer, it shows that I covered 3332.19 miles overland and sea (not including journeying to and from my start and end point). The equivalent flight between Palermo and Berlin would emit 0.228 tonnes of CO2. From what I can tell I probably have emitted more than that with the different journey route I took as I've gone so far out of the way than a plane would have. But one thing I have discovered is that there isn't a carbon footprint calculator readily available to track a journey on multiple modes of transport. If you know of one, I'd love to be able to try and see what I racked up in terms of footprint.

It is a bit galling to think I may well of caused more pollution, as that negates what I originally set out to do. But next year I'll travel to Spain on a more equivalent route by train and it'll be interesting to see what the difference is then.

The map and the distance covered doesn't tell the story though. One of the things I've taken from doing this is what the senses saw and the incremental differences along the way. The change in landscape, terrain, soil, people, language, currencies, history, crops growing, climate, architecture, among many things.

12 different countries were visited in 44 days. And in that time I slept in hotels, hostels, peoples couches, trains, boats, tents, and twice, on the ground, outside in a sleeping bag. Not bad going but never dull. I felt big highs, occasional lows and the odd upset stomach! A month by the sea, in the sunshine and away from a pretty awful British summer, I hope will get me through cold winter nights this winter.

Just to add that thanks to all who mailed, called, those that I met and stayed with en route. In particular Carlo in Palermo, Ben and Tamsin from Electric Elephant, Fi in Korcula, Kasia in Poland, Szylvia in Berlin, Mark in Belgrade, Raluca and John in Bucharest, Dirk in Tunisia, Simon and Matthieu in Krakow and most of all to Dan Radford and GG for geeing me up enough in the first place to get me to go. Right. Now to get that Masters!