RDC, Charlie D and me

I can't sleep. My mind is racing with the thoughts of the race in a day and half's time. I'm adjusting to the end of the week and trying to focus on being as relaxed as possible for when I wake, eat and hit the start line at 9.45 on Sunday. It's been an exciting week. Punctuated with meeting the finest female marathon athlete of my generation, having the fear, losing the fear, and talking shop with my housemates, work colleagues and club buddies. Now I need to turn that noise off. Get some quality sleep and focus at the task at hand.

I've moved into weekend mode. Had a massage, eaten good food and caught up with stuff. All thats left is prepare the kit and try to move much slower than I normally do to be at the most clear headed I've been since my last long run to put in a performance I'm happy with. This is where it becomes my domain, my race and whatever I imagine it to be.

The last day though has been exhilarating and this is where I put it to bed. I've been trying to get an interview with Charlie Dark for a month or so. We met a few years ago at Nike's 1948 store in Shoreditch where he started his Run Dem Crew running community, when I was doing my masters in Sport Psychology and proving a point to myself about my capabilities as a runner. I knew of him from friends and old Attica Blues records I'd bought in the early 90s. What I met was a man reinvented and re-invigorated with a love of athletics and what it could give him. I think I made a remark about how it seemed a home for 'ex-ravers who now run'... but over our runs round London I found him a charming character, more shy than the outwardly he appears, but great at goading 30 or 40 people of differing levels of ability to run through London's city centre and sites. Amongst other things Charlie delivered poetry by county hall to the group, gets people to plaster the city in magnetic lights and gives out awards to people who have improved in races and their running.

Finally, a month or so after first discussing it (and after a few missed opportunities) I got told to go to Niketown last night to get the interview. Oh, and "you might get to meet Paula Radcliffe and Steve Cram." He wasn't kidding: 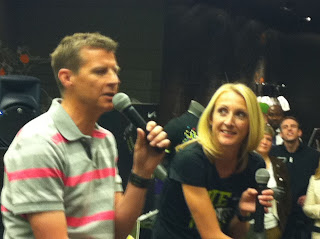 Their talk and Q and A did give out some helpful hints to those running on Sunday. Both Paula and Cram mentioned about using smaller distances in order to disassociate to get through the hard parts of the race. They mentioned making deals with yourself, to your next mile in order to keep the pace up and manage pain.

As the article in the telegraph recently said from her Alberquerque training camp, Paula uses visualisation to see herself finishing strongly up the mall in next's year London Marathon. Its her favourite race and the one she needs to excel in, to qualify for the 2012 Olympics. As the article stated: “I try to imagine that I’m in the closing stages of the marathon in London and that I really need to knuckle down and put the work in." Great advice for anyone running tomorrows race. Good luck to all taking part and I hope you get the performance you wished for.


So on to the interview... I wanted to find out about his journey, how Charlie and the runners in RDC had prepared for the race and how his view of the mental aspects of the discipline have changed over time. My hunch was right. Having started out running as a means to get fit, it is now a lifestyle choice and something that most runners who have stuck at it for a couple of years have found; it gives meaning to achievement and success (if that doesn't sound too far reaching or pretentious) and he sees the significance of the mental aspects of running and training your brain.

Early on, Charlie talks about he motivates himself pre-race by watching a duel in the sun. To him this shows how important the mental aspects of running competition are. The duel between Dick Beardsley and Alberto Salazar rightly goes down as a classic. A race that pushed both runners to the limits of their respective capabilities.

Later (at 4 minutes), Charlie mentions how he stopped using running as thinking time and now has trained to clear his mind, to focus on each run as it unfolds. This nicely ties into what Dr Tim Holder was outlining as the possible coping strategy of Mindfulness which I've written about previously. If you want to know a bit more about mindfulness, then I've provided a link here. It's not the best video by any means, but gives you a primer to get started with. I've tried it at a local meditation centre and thats a good place to start to understand more about what mindfulness is all about before you incorporate it to your training.

We mention later about Flow - a peak experience often associated with 'being the zone' when all your skills meet the appropriate challenge level to hit your target time. The flow state allows you to be completely involved in an activity for its own sake. I'll be writing in more depth about this after the marathon.  Charlie talks about encouraging others to fulfil their athletic potential - to be the best they can be. A great example of humanist principals which I use to guide my practice!  I've included a TED talk on positive psychology by Martin Seligman here. In there, he talks about flow experiences as well. As you can see, hear and read, its great to see so much sport psych practice and discipline informing the run dem crew, performance and now philosophy. Cheers Charlie. Now go get that 3.30!

Posted by Stu Holliday at 01:29 No comments: