So I'm beginning to understand what slow travel means. Its taken a long time to get here. And you begin to appreciate distance a lot more than flying. Since my last post I've clocked up the miles going further South down the Tunisian coast to Sousse (the countrys second city), Mahdia (imagine a small Greek fishing village) and then back up to Hammamet. And then made the 2 day voyage over the Med from Tunisia to Rome, where I am right now. I left my travelling companions Stella and Vangelis in Mahdia. They'd been my saviours up to that point. Driving me and my library of books with them - as chance would have it - to the same places I'd wanted to visit. We had a great time and they were great company. 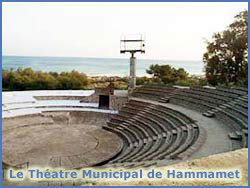 So in Hammamet, I visited the uber swish centre culturel international within whose grounds there's an open air amphitheatre overlooking the Med. Checking the travel guides I had, it turned out the annual Hammamet music festival was on. Though by no means 'Having it' as you might at Glastonbury or similar in the UK, the prospect of checking out some Tunisian live music in such a setting had to be done. Check out the picture to see what I mean. The wind blew strongly in off the sea, the piano player lost his sheet music, but an orchestra kept playing really rhythmic Arabic tunes. A tight percussion section and drummer really kept things moving along at a good pace with a traditional string section and various singers and soloists joining in through the show. I believe they were musicians for Tunisian National radio. I enjoyed it much more than I thought I would.

The audience was a strange mix. Mainly female, either really old and dressed traditionally or really dolled up in their Sunday best and much younger (in their 20s) designer clad Tunisian girls. Despite being hailed as a progressive Islamic country, as a Western bloke you don't get to mix with females still in everyday life. But I was surrounded! Just my luck I was plonked next to the older ones on my row. I happily listened, sipped my complimentary Apple Fanta, and tried to concentrate whilst the attractive girl in front clapped along and clicked her fingers in what she thought was perfect timing with the music.... Bless her, she'd missed out on that gene.

So afterwards, I made it back to Tunis and then took the ferry from there to Palermo. Dirk, a German guy who we'd camped in Nabuel with, was on the same ferry, and with some time to kill after the ferry docked in Palermo we headed to the Catacombs of the order of Capucin monks in the city. As you'll see from the pictures I've cribbed from someone, its a pretty gruesome sight. Hundreds of preserved bodies on display. We looked round, talked about life and death a bit as you would in such place, then did a quick tour of the city by Motorbike which was cool.

Had the 4 person cabin all to myself which was nice all the way from Tunis to Rome. Well, would have been perfect apart from being woken by a family with a small child at 1.30 in the morning on the first night who thought their cabin was mine. That'll be 8604 love, no 8406. Bless 'em.

Rome has been a revelation. Took ages to get from the port to the city but its an amazing place. Definitely got to return here. Where I'm staying with a guy from Couchsurfing is on the edge of the city in the direction of Tuscany. Went for an amazing run near the flat after touring the city, running through woods, next to fields and the old aqueduct which served the ancient city in Roman times. Within 20 minutes by tube, you're in the centre of Rome. I'm enjoying where I've stayed with Couchsurfers. They're so far really sound individuals, open and generous and a much better way to see a place than staying on your own in a hostel or hotel. To an outsider it might seem a dappy idea, but can thoroughly recommend it.

Till after Croatia.
S
Posted by Stu Holliday at 21:44